Many moons ago, I had the opportunity to live in Kobe, Japan as part of the Japan Exchange Teaching (JET) Program and to say the least, it turned out to be an experience of a lifetime. Today’s Tuesday Tales is about how a little pink trash can from my first day in Kobe.

The little pink trash can

I was young and it was the first time I had traveled ‘overseas’ and I was hopeful, albeit a bit nervous. I had no idea about what to expect and in a country the language of which I neither spoke nor understood, planning to work there for a couple of years did not seem as daunting as it should have. I was running high on all things bright and beautiful and was honored to be a part of this pretty cool and at the same time, enriching, program.

It was the month of August and it was hot and humid, a weather I was quite familiar with. After a couple of days of program orientation in Tokyo with probably around 5000 participants from more than 40 countries and mesmerized by all that was going on- from our stay in the wonderful Keio Plaza Hotel, to attending lectures to a beautiful milieu of what seemed like a cultural amalgamation, to making new friends-everything seemed to good to be true. After a three day period, I boarded the Shinkansen from Tokyo  and reached Kobe, along with my colleagues, some of who I became good friends with, that continues till today. We went to the Board of Education building of the city of Kobe where after some more briefing about the whats and what not-s of the program, my co-teacher from the school I was going to be teaching English at, took me to what was going to be my home for the period of my stay in that country, and the first place where I would be staying all by myself for the first time ever…too many firsts, one may say!

We went up the stairs and opened the door to the place and it was then that reality hit me. I was looking at a tiny place that was just floors and walls, with the tiniest gas stove I had seen. Oh, there was a little futon too but it was all rolled up in a corner and had not caught my attention in the beginning. I dragged my big red suitcase inside, thanked my co-teacher, Ms. Takashima (who by the way, was surprised at the emptiness of the place), closed the door after she left and slumped on the floor in a pool of tears. I was exhausted and scared but the glitz and happy faces of Tokyo and the adrenaline from all the excitement had kept me from facing some realities that the sight of an empty place brought to the forefront in no time.

I was alone for the first time ever. I had never lived without my parents and I was without friends. It felt claustrophobic in there and it was hurting bad. I went to the bathroom, turned the tap on and just sat in the bathtub, with my clothes till on. And I cried my heart out. I saw no reason to be there and just wanted to run back to the place and people who I left behind, waving through the murky glass doors at the airport.

After I was almost done crying as I could not cry any more, I heard the door bell ring and someone saying something. I was drained out from all the crying, not to mention the soaking clothes. By the time I had changed into dry clothes, and thought of three excuses about what was wrong with my eyes ( an unhealthy duration of crying does strange things to the eyes obviously), whoever had rung the bell had gone away. When I opened the door, I found a little pink trash can with a pretty lid on it…it was definitely the cutest trash can I had ever seen, with a note on it that said- ‘I hope you will make this a part of your home-Ms. Takashima’. Also hanging on the door handle was a ‘welcome bag’ from the previous batch of JET participants, who were living in the same building as us and it had all the basic necessities to help us through the first few hours.  A dinner invitation for meet and greet was followed by a very teary Skype call home and the day ended with me passing out on that tiny futon.

As I woke up the following morning and made tea (I had brought supplies from home), I realized I was calmer and less claustrophobic. The little pink trash can, with the note still stuck on the lid, was part of my ‘home’ now and I knew 20 more people than the previous afternoon and I had survived my first night away from my family. And at that moment I remembered something that my Baba always says ‘Din periye jaye. kalker din o eshei jaye‘ (loosely translated- time keeps on moving and, tomorrow always comes). I had never before paid much attention to this saying of his that he uses too much and I realized the truth of those words in that morning, sipping tea in my first home with the pink trash can.

That pink trash can made that empty space my home and the next two years went by in the blink of eye. I had some of the best times of my life there, I definitely learned much more than I had before, I made some very special memories and even more special friends and I reconnected with a lost friend who I am currently married to and who is a wonderful father to our two kids!

This picture of the school playground was taken by a dear friend and colleague near the end of my stay in Kobe. It has remained a favorite.

3 thoughts on “Tuesday Tales- The Pink Trash Can” 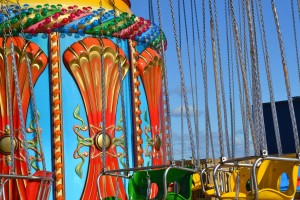 Welcome to my blog… a busy mom exploring life through forgotten tales and new adventures, travels and food, learning and unlearning!